Vectornator is a professional vector graphic design software that empowers you to create all kinds of illustrations, logos, typography, and much more. Our Pen Tool is one of the most powerful vector drawing tools out there.
Get Vectornator for Free 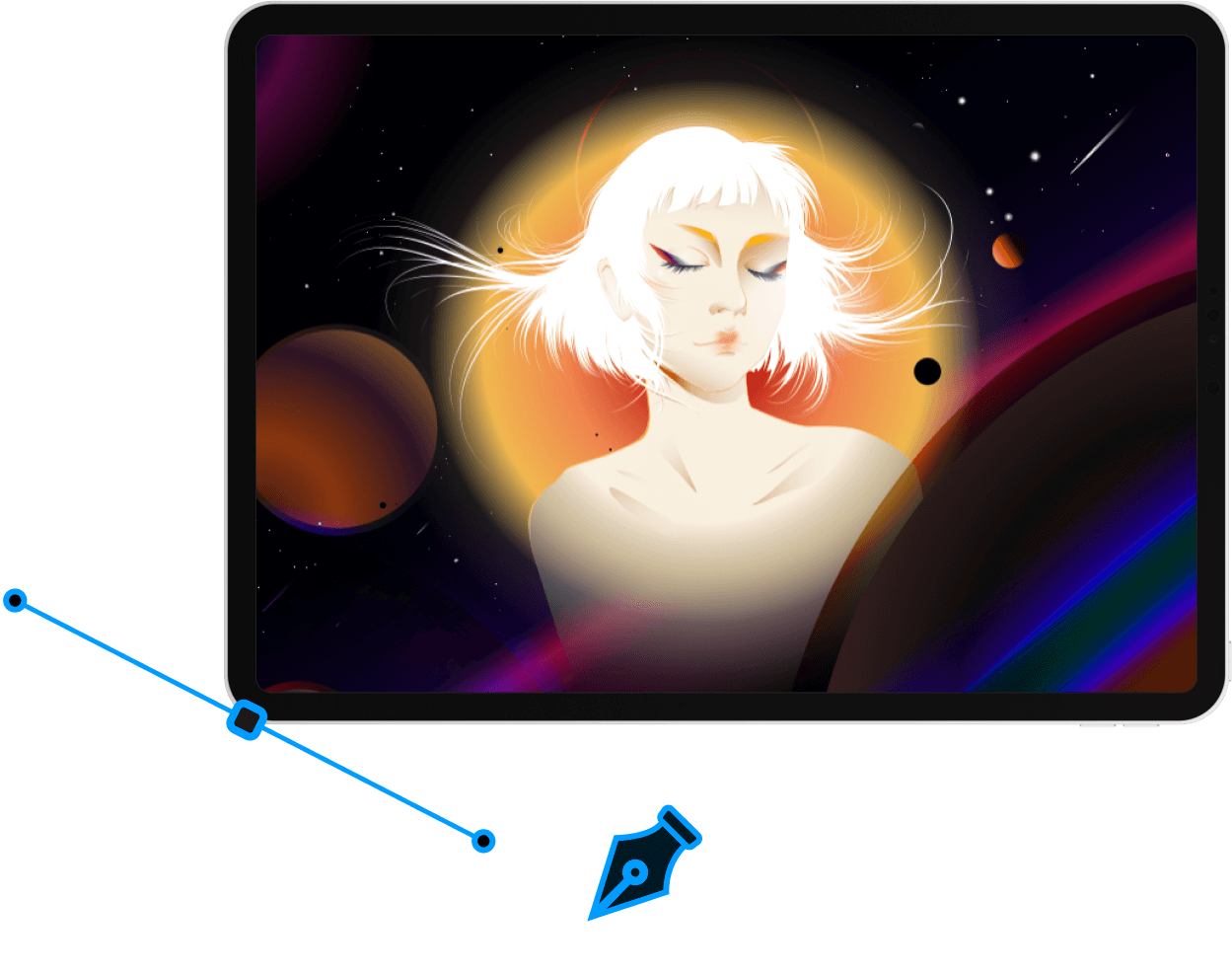 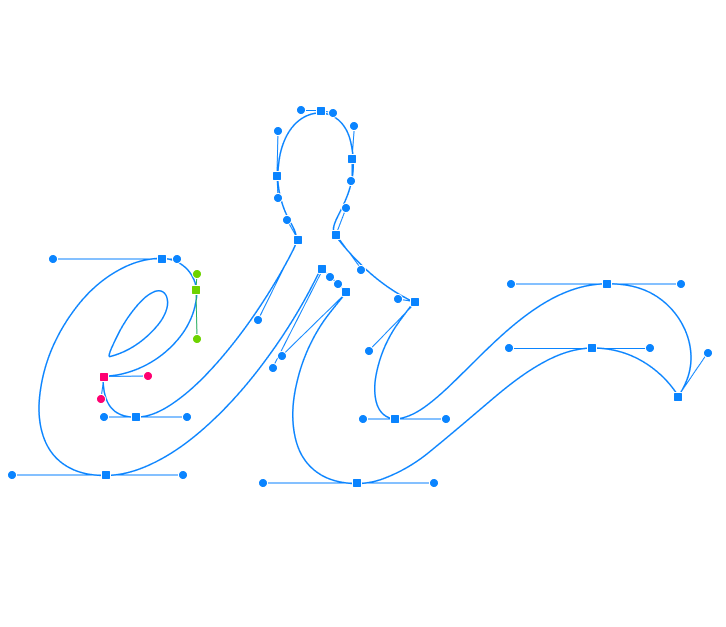 What is the Pen Tool?

The Pen Tool is essential to any vector graphics artist. It allows you to create straight or curved paths that can create individual lines or complete shapes. Using the Pen Tool is the most efficient and intuitive way to create artworks and designs in Vectornator.

Starting with a pen or pencil in a sketchbook is one of the best ways to map out your ideas. Once you have a design on paper, you can use our built-in Camera Scanner to capture it and import it into Vectornator. No need for a bulky scanner.

Add a new layer on top of your sketch layer, and begin tracing over your lines with the Pen Tool. Plot each Anchor Point with total precision using Apple Pencil on iPad. Or if you’re on a desktop, use your mouse, trackpad, or tablet.
Learn More

Like the Batman and Robin of design tools, the Pen Tool and Node Tool are powerful partners. Think of the Node Tool as the Pen Tool’s sidekick!Once you’ve used the Pen Tool to trace over your drawing, you’ll probably want to edit your path. This is where the Node Tool comes in. Use this tool to select individual anchors, change the Node Type, and adjust the path using the Node Handles.
Learn More 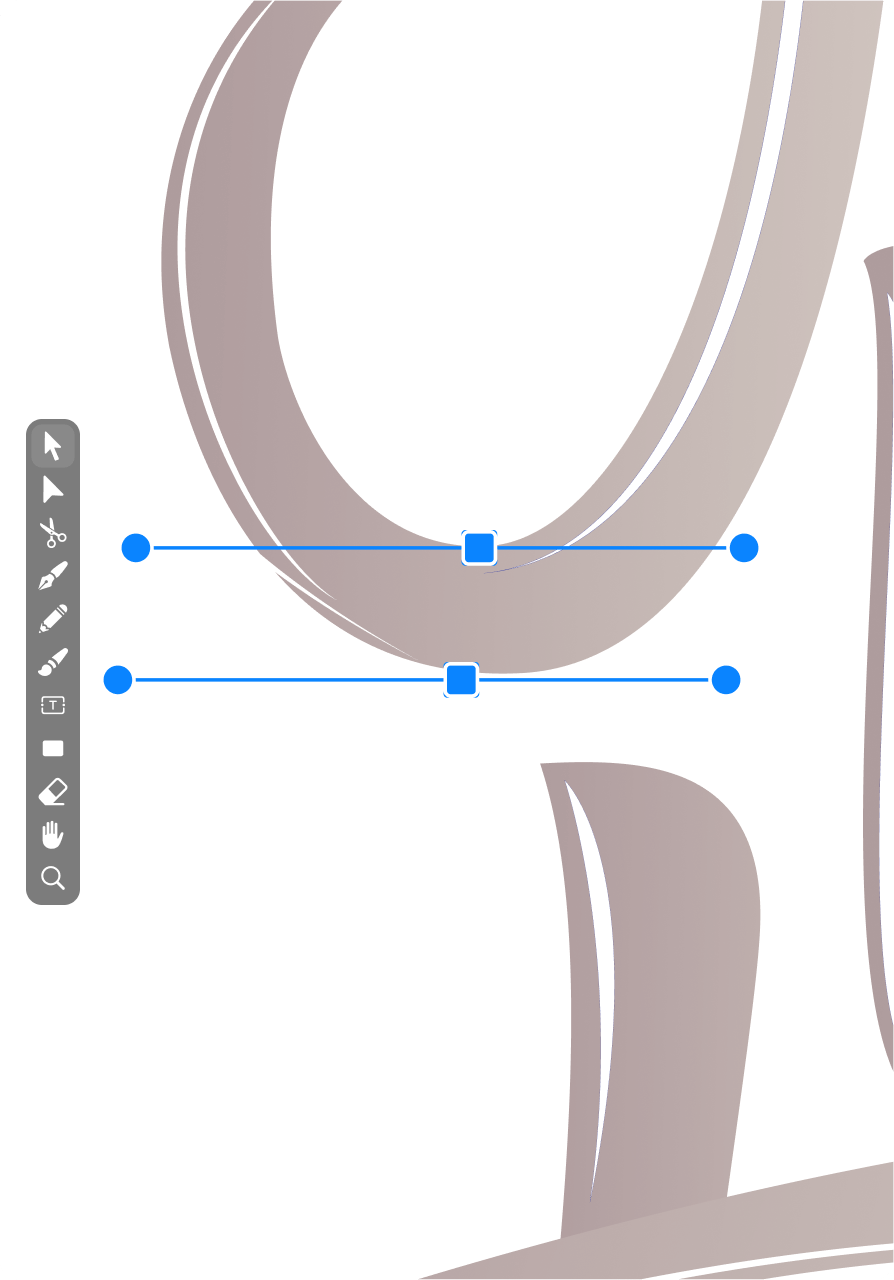 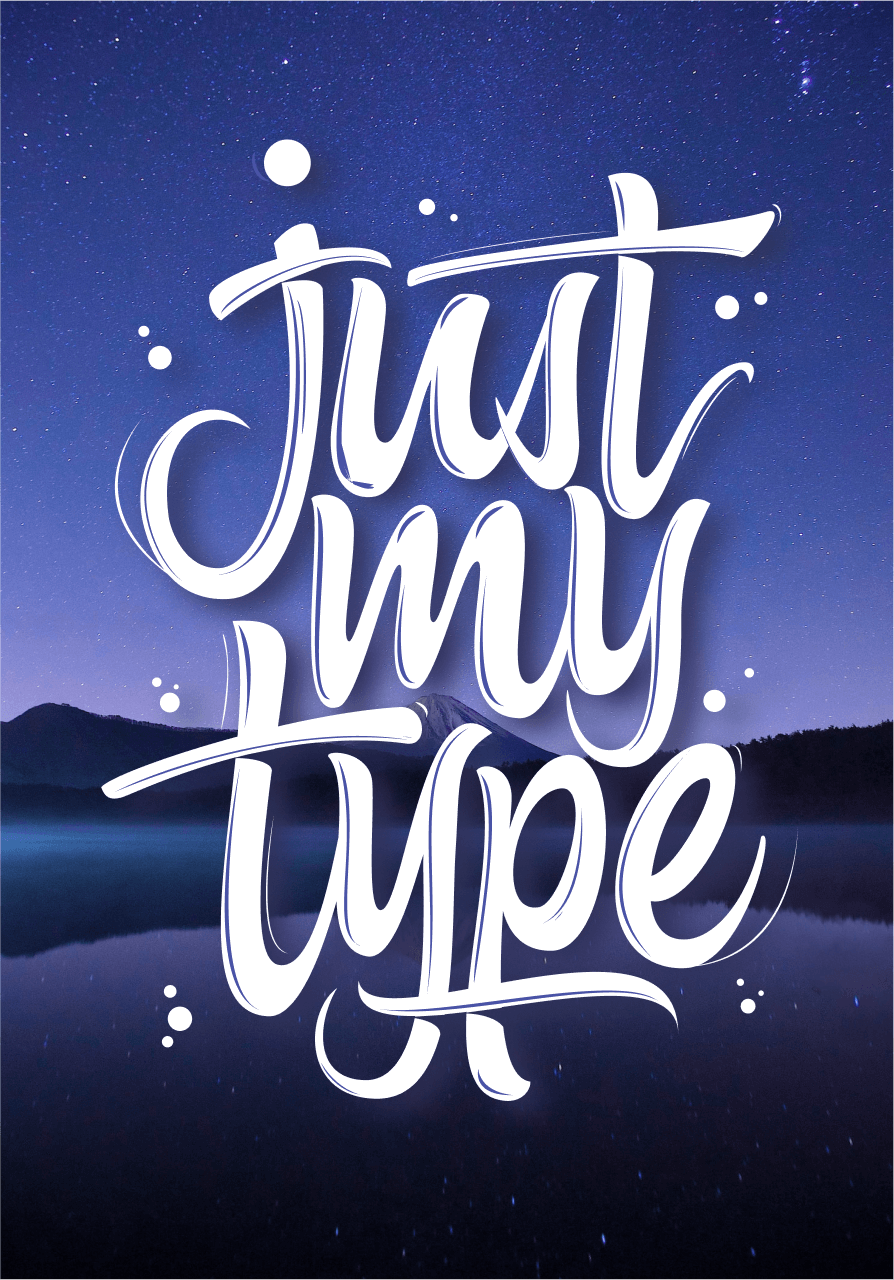 Take your artwork to the next level.

Once you’re happy with your new vector image, you can use Vectornator’s tools to bring your artwork to life. You can add shadows, blur, or even use our Unsplash Integration feature to create a background from a huge library of high-quality images.
Learn More

We are proud to support a community of talented vector artists. Their skills with Vectornator never cease to amaze us! 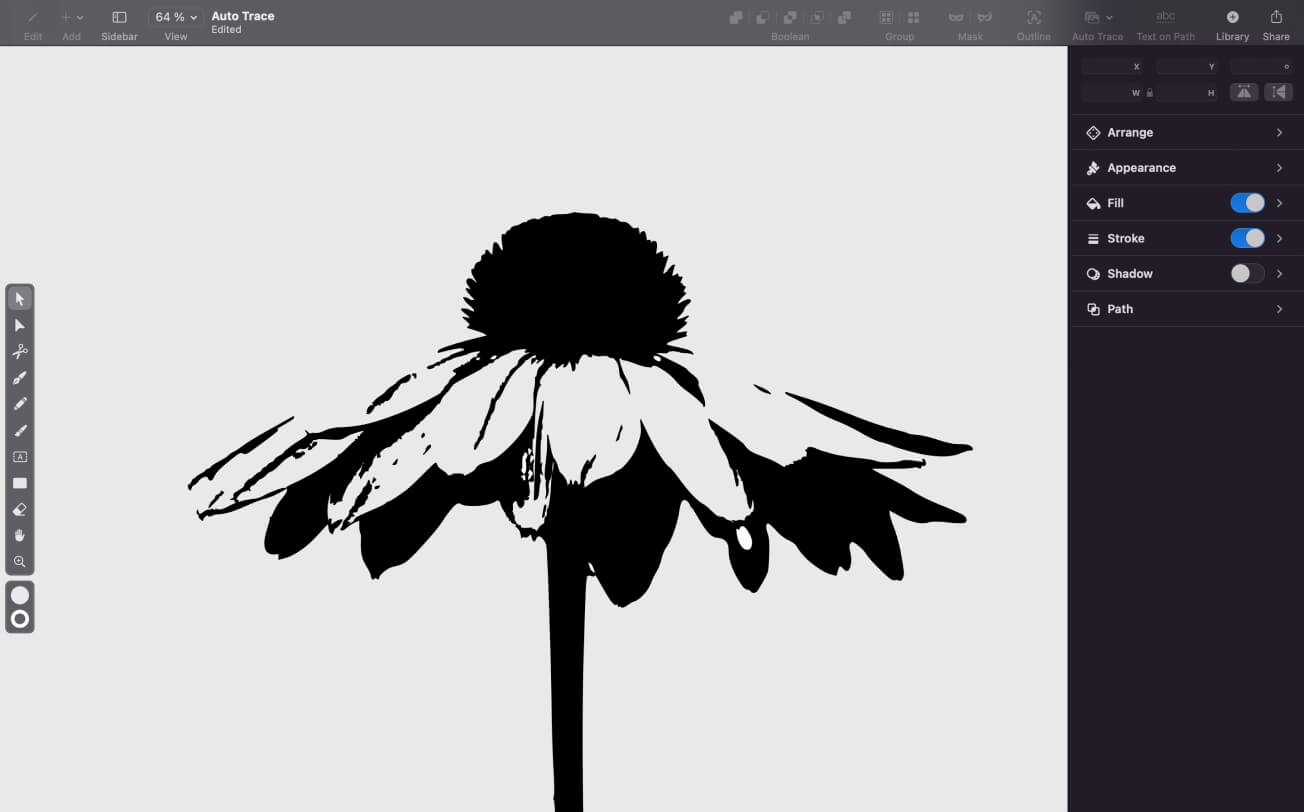 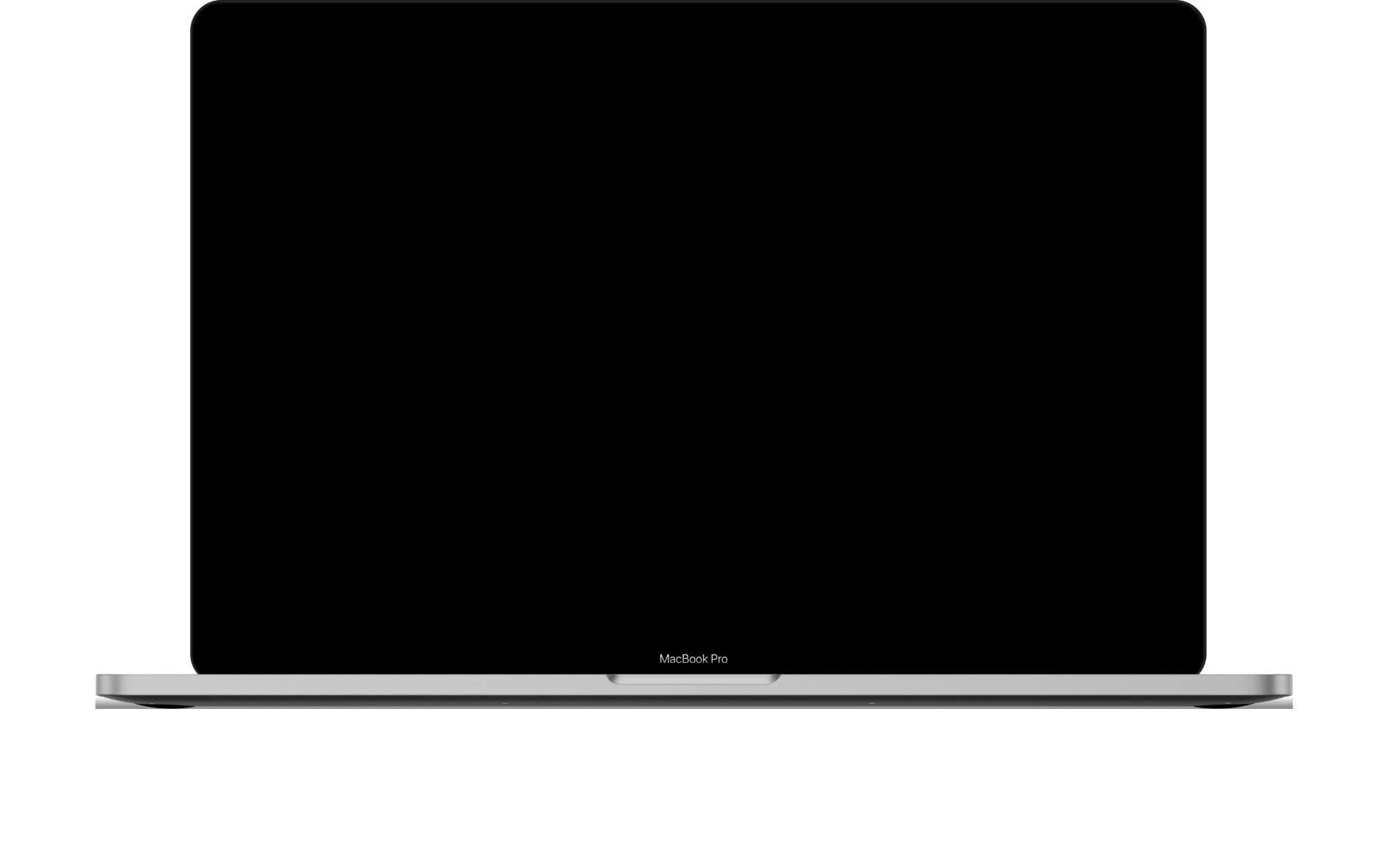 If you don’t know which Auto Trace mode to choose, don’t worry—Vectornator can do it for you! With our CoreML Machine Learning model, our Auto Trace feature will analyze your images and automatically select the “Photography” or “Sketch” mode.Sketch Mode scans your drawings on paper and turns your pen and pencil lines into editable vector paths. This mode works particularly well with hand-drawn lettering and logos. 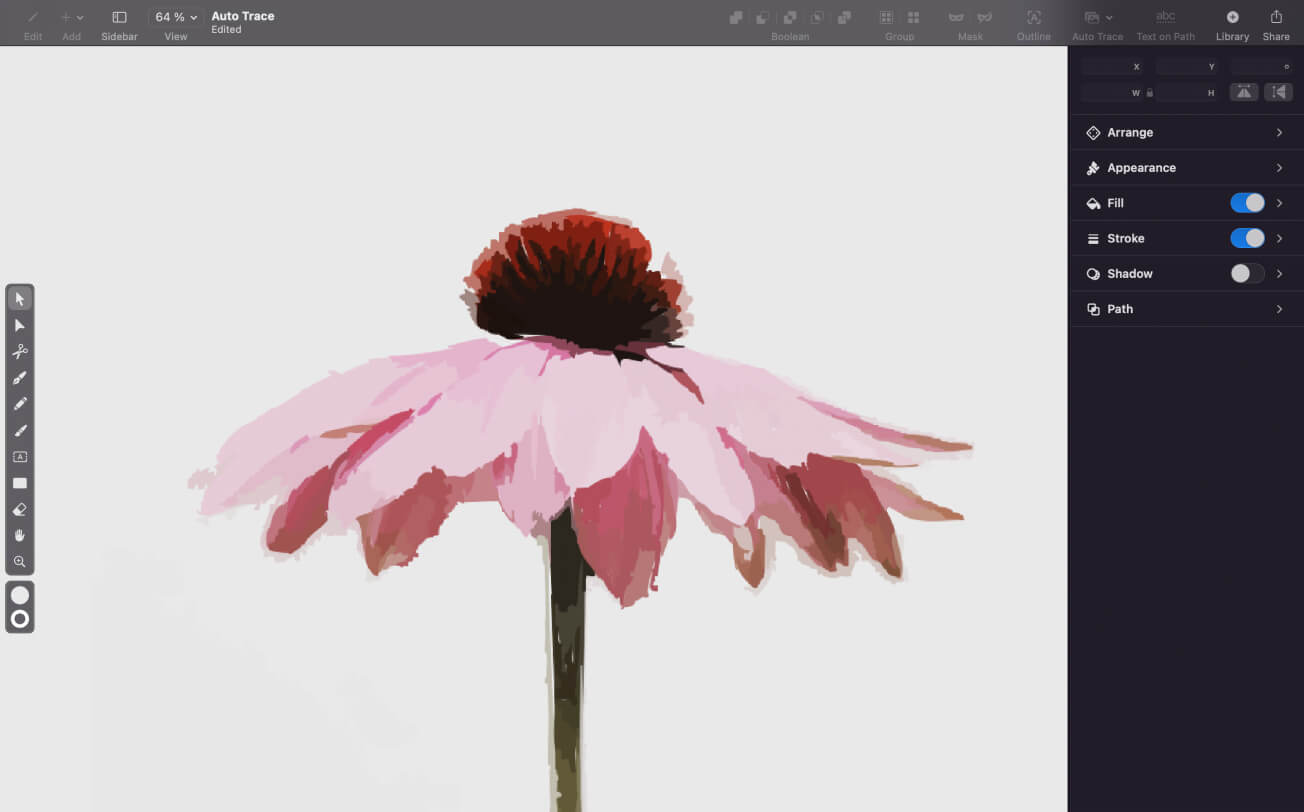 Photography Mode will auto-select all the tiny pixels in a raster image and transform them into vector shapes that you can edit and scale to any size. 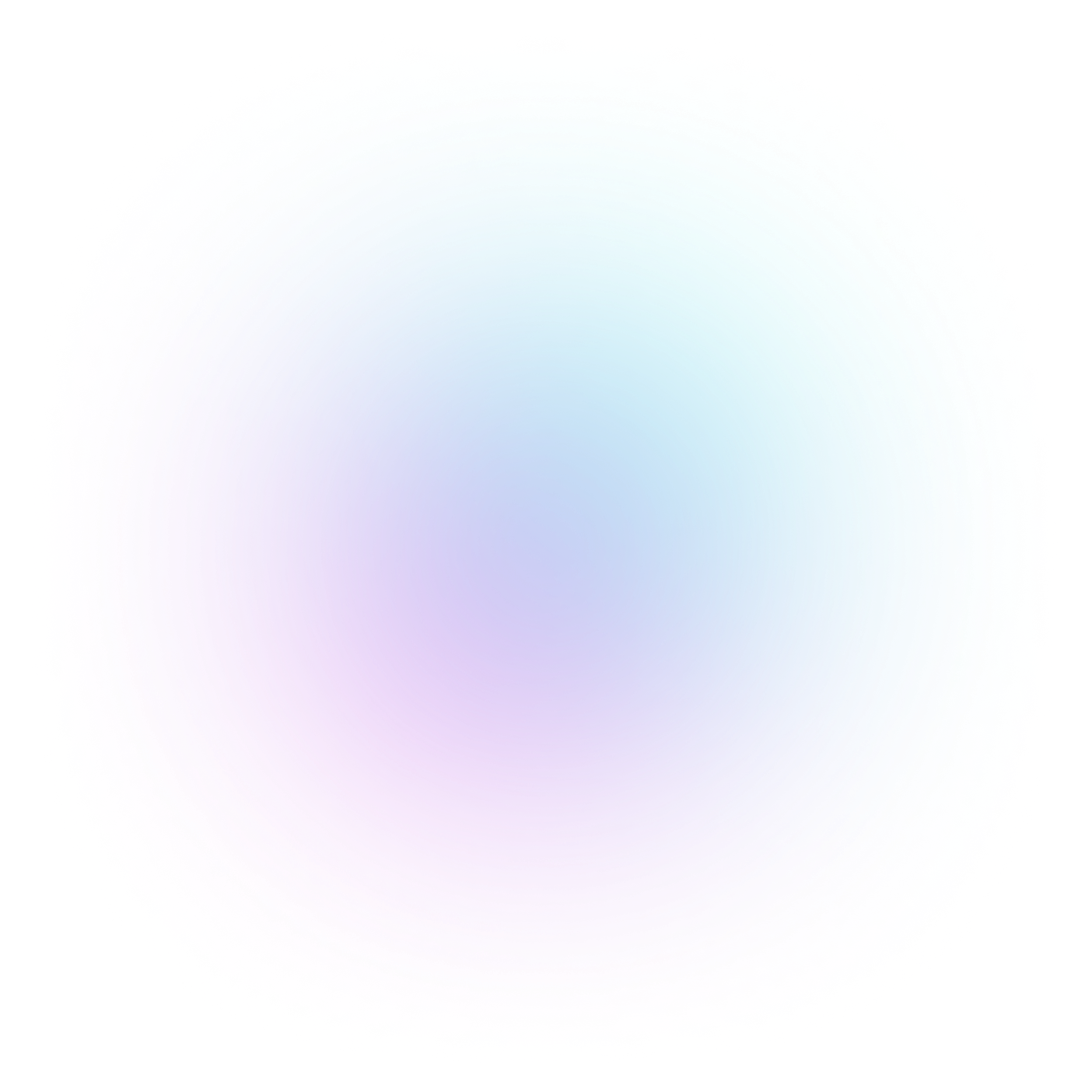 One tool to rule them all.

On top of providing powerful tools for creating illustrations, Vectornator is great for other design cases too. You can create user interfaces, lettering, and print designs inside Vectornator — no need to switch to another tool!
Illustration
Lettering
Auto Trace
UI Design
Auto Trace
Print Design

What is the Pen Tool?

A Pen Tool is a graphics tool that allows you to create precise paths with mathematical points. You can draw straight lines by plotting points or curved segments by tapping and holding to bend the line you just made. You can then create a closed path by joining the first and last anchor points.

Why is it called the Pen Tool?

Although it's called the Pen Tool, this digital tool is not used like a regular pen. In the past, it's been called the Bezier Tool, named after Pierre Bezier, the person who invented it. It has also been known as the Path Tool, since you can use it to draw a vector path segment. Today, the Pen Tool is perhaps the most powerful and important digital tool out there. Most graphic designers, illustrators, and creatives need and use it every day, which is perhaps the reason it's named after such a common and useful object.

Where do I find the Pen Tool?

To activate the Pen Tool in Vectornator, simply tap the Pen icon in the Toolbar or press the P key.

What tool is used for drawing?

Digital artists can use the Pen Tool, the Brush Tool, the Pencil Tool, and even the Shape Tool to draw. There are many powerful tools and techniques for drawing digitally, but plotting out points with the Pen Tool is the most precise way to create an accurate line or a smooth curve segment.

Vectornator users on desktop can use their trackpad or mouse button to click to add anchor points. And if you're using the iPad or drawing tablet, just tap with your stylus to add points as you draw. You path's direction and angle is determined by the position of the node handles.

What is a path?

In graphic design, a path Is a line that appears when you draw using the Pen Tool, the Pencil Tool, or the Brush Tool. It is made up of a series of anchor points  (or nodes). There are three types of paths:

What is the Pen Tool in Photoshop?

What is the difference between the Pen tools in Photoshop and Illustrator and Vectornator?

The Pen Tools in Adobe Photoshop, Adobe Illustrator, and Vectornator allow you to draw paths, but there are some subtle differences in how they work.

Unlike Adobe Illustrator and Vectornator, Photoshop is a raster-based image editing software. The pen can be used to draw fixed pixel-based shapes, a bezier path, or a bezier path-based shape.

In Illustrator, the Pen Tool is used to draw vector paths that can be scaled to any size. Any path can also be edited after it's drawn to take on the qualities of a different brush stroke or effect.

The Vectornator Pen Tool is also vector-based and allows you to create custom paths with Bezier curves. Like in Illustrator, any path you draw in Vectornator using the Pen Tool can be edited. However, we designed our Pen Tool to feel more intuitive, especially when it comes to using an iPad and Apple Pencil. Find out more about our amazing Pen Tool in our Learning Hub.

What are the Pen Tool gestures in Vectornator?

While drawing with the Pen Tool in Vectornator, there are four useful gesture combos to help you define the Node type and change your path's curves.

Double-tap on the end node (highlighted in red) to quickly end a path.

Get started with Vectornator today.

Vectornator runs on iPadOS 13 & iOS 13 and later or macOS Big Sur or later (Native M1 support).‍If you have an older Mac and cannot upgrade to Big Sur, we have the option to download the previous release of Vectornator that you can download on your macOS Catalina too. Download it here ➞